THE OCEAN STATE AND SEA LIFE 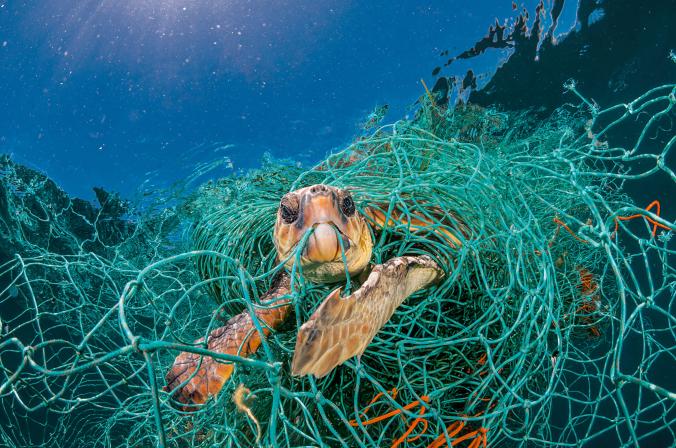 photo by Nat Geo/Jordi Chias "An old plastic fishing net snares a loggerhead turtle in the Mediterranean off Spain. The turtle could stretch its neck above water to breathe but would have died had the photographer not freed it. “Ghost fishing” by derelict gear is a big threat to sea turtles."
This year at the State House, Representative Susan R. Donovan of Bristol introduced Bill No. H5865 which would prohibit the intentional release of a balloon inflated with lighter-than-air gas.This bill received a hearing in the Rhode Island House Judiciary Committee, but unfortunately was held for further study. In Rhode Island, that means it will have to be introduced every year until it receives a committee majority vote, when it will then be sent to the House floor for discussion and a full vote of the House.

Every year at this time, Rhode Island readies itself for graduation parties, religious celebrations, weddings, the 4th of July, family picnics and other Summer activities. We think you can get the idea of how many balloons could be released during this time and what their impact would be on our Ocean State sea life.

We want you to know why a humane organization like Volunteer Services for Animals (VSA) has a great interest in having this bill become Rhode Island law. Like all bills we support, it has to do with preventing the suffering of animals-- in this case, sea life--at human hands. When balloons are found in the water, they are often thought to be food by creatures such as fish, turtles, sea mammals (whales, dolphins, seals), and birds. Marine animals innocently attempt to eat or investigate them, and either get tangled in the process, suffocate, starve or drown. It’s often a painful and long death for these victims of our failure to be responsible stewards of the sea.

It’s easy for us to grow detached in our relationship to the ocean and the animals that inhabit it because many of us regard sea creatures as lower beings. Scientists have now proven that fish and crustaceans indeed feel pain even if they do not express it in ways that are familiar to us. Dolphins and whales such as orcas have complex emotional lives, family bonds, and are known to mourn their dead. Octopi have been proven to be as intelligent as the average dog. In short, sea life deserve to have their lives defended, to swim and explore and grow in clean ocean waters.

Balloons are just one of the many other kinds of plastic waste that poison the oceans. VSA follows the national humane and environmental organizations and reads the numerous stories of sea life suffering and dying and washing up on beaches because they have ingested all kinds of plastic including balloons, bags, plastic straws and Styrofoam. Let’s also be mindful of cigarette filters that do not deteriorate and end up in our waters as well.

As residents of the Ocean State, we have a unique call to lead by example to other coastal states. Let’s all come together to keep the oceans clean for our sake and that of all the beautiful creatures that inhabit their depths. Beaches are where we as humans give a message to ocean life about the respect we have for them. They are also where we go to celebrate life, so let’s celebrate sea life by being responsible with our waste and preserving Rhode Island’s coastlines for future generations.

We know there is an American effort to go to paper straws; we know there is an effort to educate about not releasing balloons into the atmosphere and also to reduce the use of plastic grocery store bags. VSA enthusiastically supports these efforts. We know that this is something that we can all easily do, and it won’t take any more of our time or money, but it will be a great boost to protecting our environment. Will you join VSA in its efforts to make Rhode Island a safe and healthy place for all those who live in and around our part of the Atlantic Ocean and the other numerous bodies of water that are part of our Ocean State? As always, we welcome your input and comments. 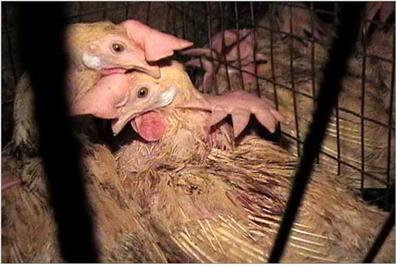 hens crammed in cruel battery cages (photo by: Mercy for Animals)
Farm animals are completely stripped of dignity in our world. When it comes to the mistreatment of animals at human hands, no other group of animals suffers such extreme and prolonged abuse.

This does not erase the suffering of domestic animals such as cats or dogs, or wildlife that face poaching and habitat loss. But the fact that the current lot of farm animals toiling away in factory farms seems to be accepted as the correct order of things is cause for great concern. It speaks to a poverty of compassion on our part.

Compassion. It means to "suffer with."

Farm animals suffer in the largest number: each year, 70 billion farmed animals are brought into a world of suffering; 6+ million animals are killed for food every hour. Here in the United States, about 99 percent of farm animals are reared in factory farms where they are seen as property and treated as such.

These statistics are so staggering that we become numb. What’s more, because the blood and terror of farmed animals is strategically hidden from us in our day to day lives, it is easy to grow complacent and forget what goes on behind closed doors.
But this does not erase the bleak, evil reality of factory farming. For those of us with the capacity for compassion, it would only take a brief glimpse into a day in the life of a factory farm animal to realize that it cannot go on. As I write this billions of cows, chickens, pigs, geese, ducks, goats, sheep and turkeys are living lives of pain, fear, confusion and heartbreak.

The sacred bond between mother and child is violated. Mother cows are separated from their calves shortly after birth; the calves are sent off to be slaughtered for veal. They cry out for each other for days on end. Male chicks born in the egg industry are thrown out or shredded instead of being taken under a mother hen’s wing. Female pigs are confined in metal crates so small they cannot even turn around to see their piglets.

The above is only a fraction of the heartbreak farm animals endure. Think of the approximately 160 million farm animals that are transported to slaughterhouses each day, exposed to harsh weather extremes, deprived of food and water.

On the news, we often hear of cows, pigs and other farm animals who demonstrate great bravery and attempt to escape from this hellish journey. We cheer them on. We who always want to see the underdog triumph over the bad guy. The lucky runaways are often taken in by farm sanctuaries. Go to your local farm sanctuary and spend time with these rescued animals living out their lives the way they were meant to. The pain that was once in their eyes. It is no longer there. They will surprise you with their curiosity and affection, their intelligence and individuality.

Farm animals want to live free of fear. They want to feel the sun on their skin. Spend time with family and friends. We as humans with the capacity to choose between good and evil betray their trust when we bring them into this world only to suffer and die.
How can we think that the suffering of billions of farmed animals across the planet doesn’t have an effect on our hearts and reflect the weakness of our compassion?

This is not an all or nothing call to action. Little compassionate actions such as eating less meat can go a long way if we all contribute. In eating more plant-based everyone wins, your health, the animals, farm and wild, and this planet we call home.

VSA has been around for 40 years--slowly but surely we have witnessed the tide is changing. Volunteer Services for Animals has fought for humane legislation to alleviate the pain of these animals. More and more people are opening their eyes and hearts to farm animals. We invite you to please join us.

For more information on this issue, please contact us at vsaheadquarters@yahoo.com

a rescued hen enjoying life with her chicks at a farm sanctuary (photos by: Farm Sanctuary) 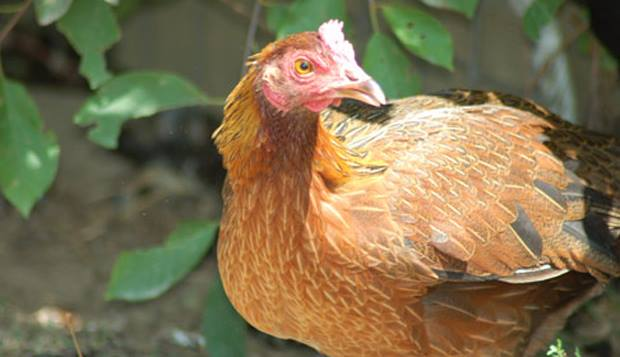 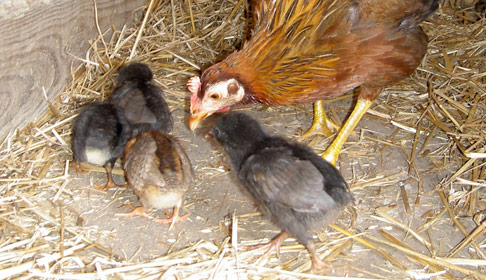 ​Scapegoat...Webster defines it as follows...a person or thing bearing the blame for others.

After much thought and discussion, VSA has decided to make a public statement about the recent comparisons in the media of animals to people who do bad things. We have heard the American President make such comparisons as well as a prominent NBC news anchor; who both found no wrong with the use of that comparison. The President has continued to label ‘bad people’ as animals and recently in a television interview about migrants, the President of the University of Notre Dame made the statement that "people should not be treated like animals". When important members of society use language in this way, we think it is time to offer our opinion on what we feel is an incorrect and uninformed way to convey an important message. We believe that these statements about animals have a deleterious impact on all animals and set the stage for legitimizing or encouraging inhumane treatment.
VSA feels it is time to speak out about these inappropriate comparisons of animals to people. We hope with your help to work to change the way language is used when referring to animals. Since it is well established that language shapes the way humans think and perceive the world, we ask you to think about the many ways you have heard individuals compare people with undesirable human traits to animals and whether using language in this way harms animals and can have an impact on the way we treat them. Those of us who care about giving the animals who co-habit our world a better chance at life, respectfully ask that you consider this viewpoint. The current unfortunate migrant situation can become a teaching moment. ​