ALL ANIMALS NEED THE PROTECTION OF HUMANS

*H537/S38 Prohibits the international and simultaneous release of ten (10) balloons or more balloons inflated with lighter-than-air gas.  Signed by the Governor on 7-8-21.

*H5131/S155 Prohibits a food service establishment from providing a consumer with a single-use straw unless the consumer requests such a straw.  Signed by the Governor on 7-7-21.


H6283 Donation of unused animal medications to non-profits, state, and local facilities by owners of animals.  Passed and signed by the Governor on 7-3-21.

S508 Killing of wildlife with the use of gun silencers failed to get a hearing.

S467 Killing of birds with a crossbow failed to get a hearing.

DUE TO COVID-19 THERE WAS NO LEGISLATIVE ACTIVITY EXCEPT TO PASS THE STATE BUDGET FOR FISCAL YEAR 2020-2021.

S308 SUB A/H5299 Chapter 131  EQUAL RIGHTS OF BLIND AND DEAF PERSONS TO PUBLIC FACILITIES (Prohibits misrepresentation of the status of an animal as a service animal in order to acquire any right or privilege afforded disabled persons.)

S465/H5433 Chapter 242  SEIZURE OF ANIMALS BEING CRUELLY TREATED (Authorizes certain state and municipal agents to take possession of animals found abandoned or neglected, and to proceed to provide all necessary care and treatment for the animal.)

S779/H6043 Chapter 147  ANIMALS AND ANIMAL HUSBANDRY -- CRUELTY TO PUBLIC SAFETY DOGS AND HORSES (Provides special protection to public safety canines and horses that are intentionally or maliciously subjected to cruelty, injuries, or death, by increasing the potential criminal and civil penalties for the offenders.)

S1022/H5436 SUB A as amended Chapter 252  ANIMALS AND ANIMAL HUSBANDRY -- ANIMAL CARE (Defines pet trainers and requires pets trainers to be licensed. This act further provides an exception to the licensing requirements for dog training programs operated by government agencies.)

HONORABLE MENTION: Important environmental legislation was introduced by State Representative Susan Donovan and her co-sponsors, Representatives Patricia Serpa, Charlene Lima, Terri-Denise Cortvriend, and House Majority Leader Joseph Shekarchi. H5865, if passed, would have prohibited the intentional release of balloons filled than lighter-than-air gas. Balloons, plastic straws, and Styrofoam kill our state's sea and air life; birds and other animals mistake these materials for food, resulting in prolonged and painful deaths. H5865 was heard in the House Judiciary Committee with a recommendation that it be held for further study. Essentially, that means the bill must be introduced again in the 2020 State legislative session. VSA is very grateful to the sponsors and hopes that this bill will continue to be introduced until it gains passage by the Rhode Island House of Representatives.

H7456 Sub A Makes changes in the definitions of what constitutes unlawful confinement of any sow during gestation, calf raised for veal, or egg-laying hen kept on a farm, and would apply them throughout the chapter.

S2133 Protects homeless persons in possession of a service animal, as defined under the Americans with Disabilities Act (ADA), from being denied access to any homeless shelter in violation of the ADA or state or federal Fair Housing Practices Act.

S2135 Increases the penalties for repeat convictions of animal cruelty.

S2777 Sub A Prohibits the sale of dogs until fully weaned unless approval for sale in writing is obtained from a licensed veterinarian.  Violations are punishable by imprisonment not to exceed 12 months or $1,000, or both.  Pounds and shelters are exempt.

H7986 Requires persons entrusted with an animal’s care to report cruelty there to.

H8170 Takes away the discretion of the sentencing judge in cases involving persons convicted of, or who entered a plea of nolo contendere to any misdemeanor or felony under the provisions of state law relating to cruelty to animals.

H5326/S928:  SUPPORTED by VSA, requires the sheltering and nourishment of dogs to conform to the industry standards established by the Tufts Animal Care and Conditions Scale requiring outside sheltering, proper nourishment, sanitary conditions, and physical condition.

H5470/S559:  NOT SUPPORTED by VSA, removes certain restrictions on who can perform routine husbandry procedures on livestock and allows a licensed human medical practitioner to assist a licensed veterinarian.

H5425 Sub A/S356:  NOT SUPPORTED by VSA, authorizes a special license plate for spay/neuter donations for the Ocean State Animal Coalition (OSAC) an organization that is not equally open to all non–profit Rhode Island humane organizations involved in spay/neuter.

H6314 Sub A/S563 Sub A:  NOT SUPPORTED BY VSA, allows a pound or animal shelter to put an animal up for adoption after ten days if it has a tag or five days if it has no tag. (VSA and Defenders of Animals requested that the part of this legislation that would have allowed Animal Control to destroy cats and dogs within a five day period be removed.)

H5882:  SUPPORTED BY VSA, adds animal hoarding to the list of cruelty, and requires a mental health evaluation for a person convicted of animal cruelty involving hoarding.

H5477 Sub A/ S341 Sub A: NO POSITION TAKEN BY VSA, requires that Municipal Animal Control Officers be certified by the National Care and Control Association.

S561/H5540: NO POSITION TAKEN BY VSA, appoints an Animal Control Officer to the Rabies Control Board.

S349/H6357: NO POSITION TAKEN BY VSA, imposes on breeders requirements already in place on other pet custodial agencies.

Animal welfare bills that were left undone when the General Assembly adjourned in September 2017 will be taken up at the next session which begins in January 2018.

Humane organizations, including VSA, stopped attempts to allow crossbow hunting of migratory birds, stopped attempts to allow non-veterinarians from performing certain husbandry procedures on livestock, stopped the bill that would limit the number of cats per household and stopped hoarding from being added to the list of cruelty to animal offenses because it did not include a medical component to help the hoarder.

A law was passed banning in Rhode Island the use of bullhooks on elephants.

A law was passed banning in Rhode Island the killing of sharks solely for the sale of their fins.

A law was passed that imposed a penalty of imprisonment not exceeding two years and a fine not exceeding $1,000 where an offense of cruelty results in an animal's death.

The Rhode Island Animal Care Laws were amended to increase the penalty for the malicious injury or killing of an animal from up to two years to up to five years.

The bill that would do away with battery cages used to hold egg-laying hens did not pass again this year. The owner of a large egg producing business operation in Rhode Island attended the hearing to oppose the bill saying that it would be financially disadvantageous for him to replace his present battery cages. The bill read that egg farmers could continue to use their existing battery cages until they needed replacement. VSA will continue to fight this extremely inhumane treatment of the chickens that produce our food. The battery cages are stuffed with chickens who cannot open their wings or turn around. When they can no longer produce eggs, they are slaughtered for consumption. VSA will continue to fight to change this extremely inhumane treatment of these birds. HERE IS HOW YOU CAN HELP THE HENS: ONLY BUY EGGS IN PACKAGING THAT READS "CERTIFIED HUMANE/RAISED & HANDLED."

Rhode Islanders are facing an obstacle in their efforts to rescue homeless animals. RIDEM succeeded in having the Animal Care Laws amended this year to include a provision which, under penalty of fines, requires anyone involved in the rescue or placement of an animal to register annually with the State Veterinarian. VSA worked very hard to try to stop this bill from being signed into law. We asked Governor Gina Raimondo to veto the bill because it would have a negative impact that would increase homelessness. We asked her for proof of its need and an in-depth explanation of how it would be fairly enforced. We received no response from the state government. VSA will do everything possible to reverse this stumbling block to the humane work of rescue. 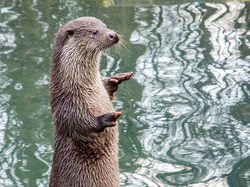 In the 2014 Rhode Island legislative session, VSA helped pass the hot car bill making it a misdemeanor to confine an animal in a hot motor vehicle. The punishment is imprisonment of up to one year, a fine of up to $1,000 or both.

VSA also worked to stave off the bill to trap and kill Rhode Island's river otters. If the otter bill became law, it would most surely bring back the use of the steel jaw leg-hold trap.

:During the 2013 Rhode Island legislative session, the following animal welfare bills were passed by the Rhode Island House and Senate and signed into law by Governor Lincoln D. Chafee:

H5426/S177 penalizes devocalization of dogs and cats, and declawing as a condition to rent

H5494/S407 expands the meaning of cruelty to animals

​S814 adopts for Rhode Island the wildlife compact recognizing violations of hunting, trapping and fishing laws of other states.  VSA advocated for these animal welfare bills which can be viewed at www.rilin.state.ri.us.